The organization is also working in partnership with other NGOS to see that stigma is reduced through the use of relevant verses of the holy Books that seeks support and care.

According to a Baseline survey conducted by WOFAN July- December 2003 in 10 local government areas of Kano , a high disparity in the infection rate was identified in all the 10 communities. Likewise it was evident from the research that the rate of spread of the virus has a direct relationship with gender issues and poverty. Likewise stigma and discrimination remain key issues undermining efforts to combat HIV/AIDS

The research also illustrated high level of stigma and the disproportionate impact felt by women. As a result of the aforementioned, WOFAN felt the urgent need in creating awareness to address HIV issues in Kano state with the following objectives:

Other programmes related to HIv reduction include:

-WOFAN’s ongoing WOFAN’s functional literacy programme for women in the rural areas which started since 2002, and graduated 80 women in December 2004 continued to build the capacity of the women. 120 women were newly recruited into the 4 adult learning centers supported by WOFAN where functional literacy programmes including HIV/AIDS reduction strategies are taught to the women.

The functional literacy programmes and the economic empower programmes have given women the power to build self esteem through their various income generation activities, art of speech making on issues that affect them through radio, paying advocacy visits and getting the support of renown religious and traditional leaders and being able to take simple decisions at family and community level. This has eventually given women the power of protecting themselves from falling victims of HIV directly and indirectly.

For example in a village in Kano state-Kumurya, there are 15 teenage girls in the range of 13- 16 years who have personally enrolled themselves in the literacy center and have reduced the hours of hawking by at least 5 hours from the usual 8 hours when they were forced by parents to hawk. “I regret that I was not enrolled earlier by my parents in school and now I have realized that to improve my life in the future and that of my children, I need some form of basic education to protect myself from various  diseases including HIV and also to sustain life when I am married” lamented Hasiya Abdullahi during the assessment of the literacy programmes in Bunkure LGA.

In the same vein, 48 women from another village called Kera in Kano state have also started a literacy programme in their center taking a leaf from the Kumurya center. According to the leader of the women group, “ we are becoming more informed on our health, environment and how to prevent our selves from diseases such as HIV, malaria and diseases that kill our children from our literacy classes- right now, no woman in Kera will allow a birth attendant to use an old razor blade during childbirth in this village of over 2500 child bearing aged women!” .

An Islamic working manual, on HIV awareness was jointly put together by WOFAN and the Islamic medical association (ISMA) to help tease out verses of the Qur’an and Sunnah which frowns against stigma and discrimination. The two organizations put head together with Islamic religious leaders to find relevant Qur’an verses and Sunnah that discourages any form of stigma to fellow human beings. Likewise a poster has been developed by WOFAN on women’s right tree in Islam which allows women understand their roles and responsibilities as well as what is due to them from the Islamic context., All rights issues raised are backed up with verses of the Qur’an and Hadith which supports women and children’s rights. The manual has become a handbook for most of the schools and even NGOs and clinics in Kano .

Women have demanded fair treatment in cases of HIV/AIDS since most positive women were infected in their matrimonial homes. “Flashing back at 20 years ahead, a lot of mistakes have been made that can lead to contracting HIV- for instance, we used razor blades for over 20 people at the same time in child birth, circumcision, hair cuts etc. Like wise our hospitals have given blood without screening, injected us and our children with a single syringe for many patients on the same day, as such we are calling on our leaders to disabuse the minds of people from stigma and name labeling when people become negative.

“Yes, I will encourage my daughter to go to the VCT center before she gets married”, says Salisu Makeri in Dususu village in Garko LGA, when A Hausa service correspondent of BBC visited the village to follow up on WOFAN’s campaign on the use of VCT centers. In the village of over 3000 people, a random sampling of 25 households got 14 households to accept that they can visit VCT centers when the need arises since sexual intercourse is not the only means of contracting HIV and if they find themselves positive, it gives them opportunity to take proper care of themselves and protect their loved ones from being infected.

“HIV stigma has reduced drastically in our rural communities”, says Muntari, the leader of the youths in Kumurya village. People talk freely on HIV issues these days because daily you hear jingles, radio discussions and NGOS talk against the spread, as such it is no more a taboo to talk about HIV.

The media and a number of NGOS and the general public were invited to participate in the joint rally and peaceful procession organized by WOFAN, Society for Family health (SFH)- Kano, and COPOP-PLWHA on the 3/4/2003 round major streets of Kano to draw the attention of the general public to the need to end the stigma and discrimination of people living with and affected by HIV/Aids

The colorful procession with fleet of buses, motorcyclists in a beautiful lemon green jacket and placards with messages against stigma and discrimination started with the first stop over at the Palace of the District Head of Kumbotso and Dan Lawan Kano, Alhaji Ahmed Ado Bayero in Kumbotso Local Government area of Kano state.

At the palace, Alh. Ahmad Ado Bayero praised the efforts of the participating NGOS and copop members members for their courage in taking giant steps in informing and breaking the silence and myths surrounding HIV/AIDS. He shunned the discrimination of people affected and infected by the deadly virus. According to him, all his ward heads and community leaders will put heads together to ensure that at all public gatherings and community meetings, reminders will be sent to the general populace on the need to show love, care and support to all affected. Alhaji Bayero went on to say, “If campaign against HIV and stigma is to succeed, it must target all sectors of society, including religious leaders, the media, teachers and families”. The district head called on WOFAN to intensify training and awareness in his ward by conducting awareness and technical trainings for all his ward heads, traditional and religious leaders and the general populace particularly in his district council.

The secretary of COPOP, Mallam R (name withheld) thanked the district head for his exemplenary actions and kind words, “if people living positively receive attention like this, and government provides adequate facilities, stigma will stop and more people will be willing to test and declare their status and surely, it will reduce the spread of the virus”.

A 7 year old girl living positively and who is already orphaned and now living with her grandmother was presented to Alhaji Bayero, who gave her a hug to prove to the general public that people living positively could be hugged and shown affection. The grand mother of the child thanked all the team and the traditional ruler for the support and called on government and NGOS to strongly support orphan children as a result of the HIV/AIDS.

The next stop over was to 2 media houses in Kano : the procession visited both the Kano State Radio and City Television (CTV). At Radio Kano , the Director of Engineering Service, Alh. Aliyu Adamu, who received the team on behalf of the Managing Director, Alh. Bello Kankarofi. With placards all raised up, an appeal was made by the coordinator of WOFAN, Hajia Salamatu Garba, for media to intensify information through the radio using jingles, drama, songs, debates and short talks by all stakeholders. The media was also called upon to waive charges on HIV programmes to enable more programmes to be aired for the benefit of the public.

On her part, the programme officer from society for Family health- SFH, Hajia Nabila Ismail, called on the MD to discourage programmes that can influence stigma and discrimination on positive persons. She further briefed the MD and all the staff of radio Kano of the activities her organization carried out during the world aids day celebration, which included a joint rally by SFH and COPOP in Dawakin Kudu LGA where the chairman shook hands with the COPOP chairman as a sign to fighting stigma. Other activities at the SFH-COPOP joint programme included songs and drama against HIV/AIDS stigmatization. She further said, “SFH is a leading Reproductive NGO in Nigeria and a major partner in a 7-year programme on Promoting sexual and reproductive health and HIV/Aids reduction (PSRHH), in Nigeria . In his response the MD praised the efforts of the collaborating NGOs and encouraged others to learn from their experience and determination to fight HIV/AIDS in Nigeria . He assured the rally team of constant support from the media.

At the CTV- Kano, the Permanent Secretary, Alh. Faruk Umar Usman listened attentively to the similar address as his radio counterpart and addressed the team by throwing more light on ways on reducing and preventing the spread of HIV/AIDS. He also spoke at length to give encouragement to the COPOP members and to inform them of the plans of the federal to discourage all forms of stigmatizations through sensitization and awareness campaigns. The voices of positive women were also captured when in a low soft voice; one of the women living positively thanked the management of CTV for the strong encouragement. “Most of us are married women and got infected through our spouses, it is therefore wrong to link HIV/AIDS to prostitution only”, she says. In his vote of thanks, the secretary of COPOP thanked the MD for his support on the fight against HIV/Aids. The secretary stated that it is sad that the general public needs to be reminded that there are other ways of spreading HIV/Aids outside sexual intercourse and that the media should work hard towards obtaining behavioral and attitudinal changes through out Nigeria in order to achieve a sustainable reduction and prevention of HIV/Aids.

Dr. Bashir Abba, Coordinator of the State AIDS Control Programme in the Ministry of health received the procession on behalf of the State Commissioner of Health, Dr. Sanda Muhammad. The Commissioner said the state government has established a voluntary counseling test center (VCT) at the Infectious Disease Hospital (IDH) to be commissioned soon. In his vote of thanks, a member of COPOP, Malam Jae (not real name) called on the general public to stop stigmatizing and discrimination against them. He lamented that most hospitals and health posts lack the desired drugs and facilities for the treatment of HIV/Aids symptoms, this according to him could be one factor why a lot of people have declined from testing to know their status. He therefore solicited for strong advocacy on voluntary testing by all and the federal government and all the traditional leaders should make sure there is an enabling environment for positive people to live a life free of stigma and discrimination. 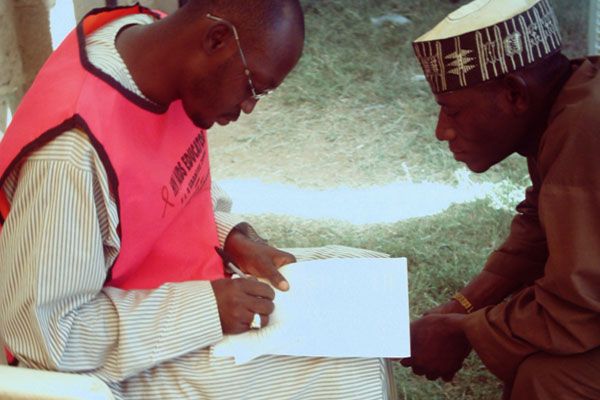