While presenting the mobile vending machine to the Katsina State First Lady and women from Daura District area involved in pastries and local snacks business, WOFAN’s Executive Director (ED), Hajia Salamatu Garba explained that the way small holder business women present their products often affect their sales. She said edible items like pastries and confectioneries must be presented in neat and hygienic ways to attract patrons without spreading disease. She said this was why WOFAN Project office designed and fabricated a mobile vending ‘show glass’ with several compartments, which can keep foods, snacks and various drinks fresh while preventing contact flies and dust thereby keeping the items hygienic and fresh. She said such hygienic and healthy presentation would not only make the snacks safe for consumption, it would also make the presentation attractive, thereby raising sales for the women. 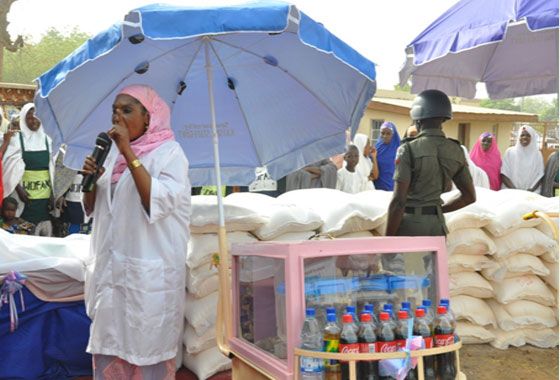 Hajiya Salamatu further said since the mobile vending machine was designed with women in mind, WOFAN decided to name it Alfaharin Mata (which literarily means “ladies pride”), as it will make movement easier for them and prevent them from harsh weather, be it rain or sunshine since it has a detachable position for an umbrella . On the major components of this light weight machine as pointed out by the ED is that Alfaharin Mata has two parts which are detachable. The top part is the ‘show glass’ for the display of pastries, confectioneries and drinks while the lower part is further divided into two compartments for other items and also can serve as a storage compartment for the women. The lower segment of the mobile machine is made of steel which rests on a two motor cycle tyres. It also has handles for pushing the mobile vending machine and a holder for big umbrella which can protect the women from rains and sunshine while she moves her business for the day. At the same time, the lower part has space and compartments that could serve as a storage compartment. “The mobile vending machine is designed in such a way that it can be dismantled at the close of business every day. And, it can used on location as a shop or be moved around as a mobile shop”, she said. The First Lady of Katsina state Hajia Fatima Shema, launched the unique mobile vending machine in Daura, during the closing ceremony of a refresher training program organized by the Katsina State Ministry of Women Affairs and facilitated by WOFAN. Hajia Fatima Shema described Alfaharin Mata as a ground-breaking model which is bound to help women pastry and confectionery makers present their products in more healthy and eye-catching ways thereby attracting more patrons and increasing their profits. She further stated the machine can be used for sales of food items in schools and clinics as well as during trade fairs , local market days etc. thereby reducing the risks of unhygienic food which normally leads to outbreak of diseases such as cholera.

Hajia Fatima testing and presenting the mobile show glass to the general public, promising to see that the model is replicated for the benefit of Katsina State women.

Katsina State First Lady, Hajia Fatima Ibrahim Shema launches Alfaharin Mata, WOFAN’s mobile snacks ‘show glass’ as she presents snacks to the Daura local government chairman as a model to the state. She advocated that women should be supported and trained to wrap all snacks and other related items in clean cellophane wrappers before they are sold to the public.