WOFAN organized several events in Sokoto and Bauchi states to mark the 2012 World Toilet Day, rounding the events off with grand ceremonies at which hygiene materials were distributed to about 40 communities and ventilated toilets were mounted in households by community members empowered by WOFAN.

The grand ceremonies included community mobilization in Baram Gada community of Bauchi LGA and Buskuri community of Katagum LGA on the 19th and 20th of November 2012 respectively as well as the commissioning of water points provided as part of Phase II of the USAID/WOFAN WASH Project in Bauchi State.

In Sokoto, WOFAN joined the rest of the world to draw attention to the hygiene and sanitation challenges posed by lack of toilets by organizing a public event at Federal Low Cost Model Primary School, Arkilla in Wamakko as part of WOFAN’s contributions to global efforts to break the taboo surrounding the discussion of toilets and improve access to sanitation facilities across the world.

As the event began, EHC members matched round the school in a parade with messages on cardboards. The main aim of the messages, which targeted other children and community members, was to convince every member of the community that using toilets has significant effects on all members of the community as open defecation spreads diseases.

Malam Nura Musa Marina set the ball rolling with a short speech on the importance of World Toilet Day. He explained that the day was set aside to draw attention to the dire sanitation challenges posed by lack of toilets in many homes.

He explained that disease-causing germs are spread more quickly through open defecation and lack of personal hygiene. This, he explained, is why toilets are very important as they reduce spread of disease. He also disclosed that hand washing with soap at critical times especially after using the toilet is very important as it ensures that germs possibly carried from the toilet are not transferred to food or spread through contact.

He challenged the pupils, especially EHC members, to practice whatever they learn about personal hygiene and environmental sanitation and also share their knowledge in these areas with other children who are not aware as well as with other members of their households.

The Head Teacher praised USAID/WOFAN’s efforts in providing very good toilet facilities for the use of the school and community members.

Then, on the 19th and 20th of November, WOFAN marked the World Toilet Day in Baram Gada and Buskuri where two households each actually moved up the sanitation ladder by using locally available and affordable materials such as thatch to build structures round the concrete slabs constructed by community members during the training sessions organized by WOFAN in the preceding week.

The simple ventilated household toilets constructed by these community members provided good examples of the safe, affordable sanitation options available to communities in meeting the challenges posed by open defecation. The mounted toilets also served as motivation for all members of the communities where the toilets were constructed to adopt the practice of providing each household with a toilet facility.

In addition to drawing attention to the toilet debate however, the grand events in the two communities were also used to commission and hand over 40 units of Hand pump borehole facilities constructed during the Phase II of the USAID/WOFAN WASH project phase in the state.

A simple ventilated toilet mounted at Malam Adamu Bala’s residence in Baram Gada on WTD. It was constructed with thatch, corrugated iron sheet and concrete slab built by community members trained by WOFAN

The 42 units of 500 liter water tanks presented by USAID/WOFAN WASH project to 42 Schools and Clinics during the WTD event in Baram Gada, Bauchi LGA

In his welcome address at the World Toilet Day grand event at Baram Gada Community Clinic in Bauchi LGA, the AGM (Sanitation), Bauchi RUWASA, Alhaji Dahiru S. Sanusi explained that November 19th of every year has been set aside globally as World Toilet Day, a day meant to sensitize communities, especially the resources-poor communities, to pull will and locally available resources together to provide safe and sustainable toilet facilities for every household that has none. He affirmed that proper sanitation and safe disposal of human feces is a very strong means of reducing the spread of diseases, stressing that it also saves time and money for other priorities.

In his welcome address at the World Toilet Day grand event at Baram Gada Community Clinic in Bauchi LGA, the AGM (Sanitation), Bauchi RUWASA, Alhaji Dahiru S. Sanusi explained that November 19th of every year has been set aside globally as World Toilet Day, a day meant to sensitize communities, especially the resources-poor communities, to pull will and locally available resources together to provide safe and sustainable toilet facilities for every household that has none. He affirmed that proper sanitation and safe disposal of human feces is a very strong means of reducing the spread of diseases, stressing that it also saves time and money for other priorities. 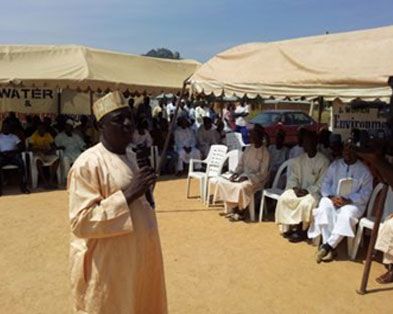 Also speaking at the occasion, Mrs. Rabi Ekele of NEI enumerated the numerous advantages of having functional toilets in schools, urging school management committees to ensure maintenance of their toilet facilities in order to discourage open defecation.

In his own remarks, Alhaji Umar Musa Chinade, Bauchi SUBEB’s Director of School Services emphasized the importance of providing schools with toilet facilities during. He noted that provision of toilet facilities in schools can greatly increase school attendance and retention especially for the female pupils who may be forced to avoid school if there are no toilet facilities.

And, Alhaji Ahmed Naiya of TSHIP reiterated the importance of providing community clinics and health centers with comfortable and accessible toilet facilities as he maintained that clean accessible toilets provide the comfort needed by patients and visitors to such centers.

All the presentations and speeches at the WTD stirred community members into pledging to ensure all households had toilets to stem the incidence of hygiene and sanitation related diseases in their respective communities.

After the rigorous mobilization and sensitization efforts by all the stakeholders present, the occasion became a platform for the activation of the 40 water points provided by USAID/WOFAN under Phase II of the WASH Project in Bauchi State.

The Permanent Secretary, Bauchi State Ministry of Water Resources, Alhaji Muhammad Auwal Ibrahim had the distinguished honor of commissioning the first of the 40 water points. 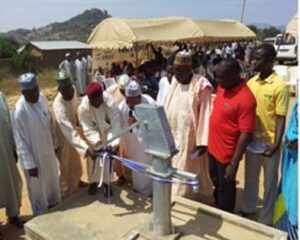 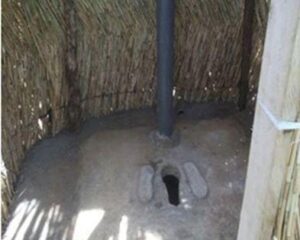 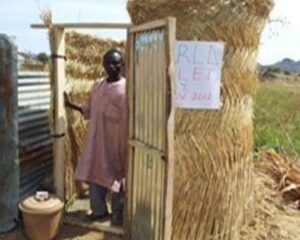 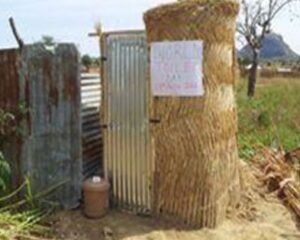 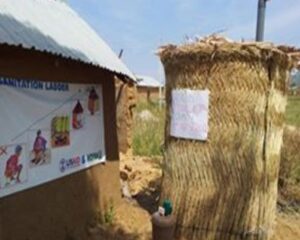 Hygiene materials were distributed to all the communities benefiting from the Phase II of the WASH project in the state to show the way in fighting challenges posed by poor personal hygiene and environmental sanitation. 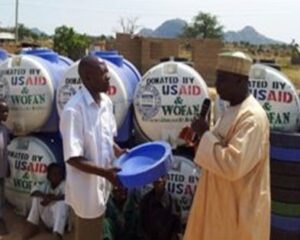 The 2012 WTD was brought to a befitting end in Baram Gada by the village Head, Alhaji Adamu Muhammad, who seized the moment to express the community’s gratitude and appreciation to USAID and WOFAN for the WASH project. He noted that the project has greatly and positively impacted the lives of his community members through various trainings provided to his people by WOFAN/USAID. He explained that now that safe drinking water has been provided, the impact would increase immensely. He promised the he would work hard to personally ensure that the sanitation option demonstrated to mark the World Toilet Day is adopted by every member of his community as it has shown that there are safe, affordable ways to put an end to open defecation. 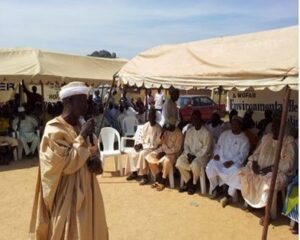 A new advocate for the debate on toilets… Village Head of Baram Gada, Alhaji Adamu Muhammad calling on his men to improve sanitation and stop open defecation.

On the 20th of November, the World Toilet Day was replicated in Buskuri community in Katagum LGA to further spread awareness on the need to talk about toilets and find sustainable solutions to the sanitation challenges posed by lack of toilets.

To stimulate the debate, simple ventilated toilets constructed by community members trained by WOFAN were commissioned. As was the case in Baram Gada, the toilets were constructed with safe and affordable materials. 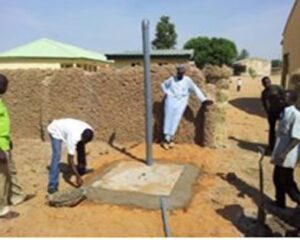 Construction of simple toilet in Malam Usman Abba’s house in Buskuri community, Katagum LGA… the beginning and the finished product

Also, the water point provided at Buskuri Primary School by USAID/WOFAN under the Bauchi WASH Phase II Project was also commissioned by the Chairman of Katagum LGA. 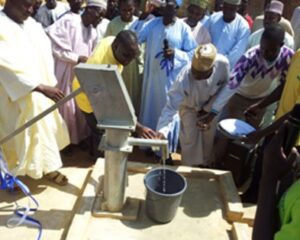 And, hygiene materials were distributed to communities benefitting from the WASH project in Katagum Zone. 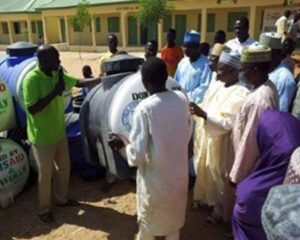 At the end of the WTD events in Sokoto and Bauchi states, WOFAN deepened the debate on toilet by facilitating live radio discussion sessions to further create public awareness on the general theme of World Toilet Day. The live studio audience, drawn from Alkaleri, Bauchi, Dass, Ganjuwa, Itas Gadau, Katagum, Misau and Ningi LGAs of Bauchi State, took turn to express how the events had opened up their minds to the fact that from simple, available and affordable materials and that such toilets can be safe and durable. 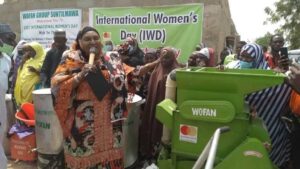