In an annual end of year coalition meeting (December 2014), WOFAN with targeted partners and health workers from the Ward units of over 200 communities across 3 states of Kano, Bauchi, Katsina and Sokoto,

a  quick  review on  Basic guide for Routine Immunization   service providers and role of the Traditional Birth attendants   was organized by WOFAN  and  the child survival unit of primary health care center.

In order to scale up  advocacy  and press for action on health needs of the populace across  7 Northern Nigerian states  faced with high maternal mortality rates,  WOFAN has introduced the use of a popular 30 minutes sponsored  radio spotlight programme to create awareness to the general public on  immunization exercises, harmful traditional practices  against women that affect their reproductive health  and rights . The coalition and network are advocating for an improved child care handling and safe

motherhood issues and increased services to the populace.  This is in collaboration with religious leaders and health personnel. 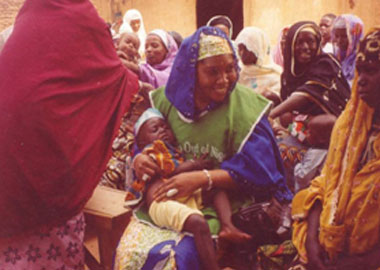 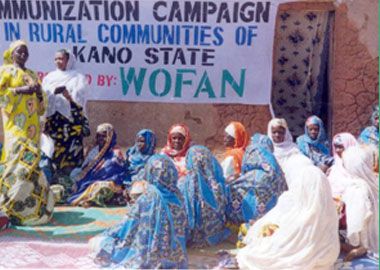 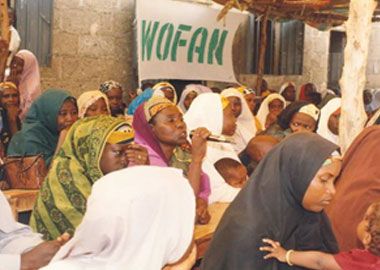 Flashing back at the achievement of the network of over 150 groups  between  2012- 2014 on advocating for health needs and improved livelihood, Women confirmed that   through the Use of radio as an advocacy tool  and training them on basic health tips and use of ICTs   for  agricultural and entrepreneurial  scale up , the activities have

–  Given them a voice to speak out on issues that affect them and the well being of their families  which ultimately has given them confidence to dialogue with various policy stakeholders  and   empowered them in the area of speech making.

– They have also been able to promote the idea of peaceful coexistence among themselves and between them and other rural communities.

–  They have kept alive some of their cultural practices, and are working towards eliminating discriminatory practices that may affect their health  and have shared these with  other  communities during various levels of exchange visits among themselves

–  It has increased the rate of interaction within and between rural community members discussing business, agriculture, marketing tracking and health needs of the communities with one voice and one interest. This is because they talk more now with and among themselves and this has  enabled  them to know themselves more than they hitherto.

According to Hauwa Mohammed the umbrella leader for the Network and coalition said “being a farmer led advocates doesn’t mean that health issues and education should not be their focus”!

In another development Hadiza from Panshekara unit of the network indicated the more focus will be paid to working and Advocating with political, religious and traditional leaders to press for action towards adequate services for good health care

On the conclusion all the women groups in the coalition agreed that Nigeria will have to Demystify rumors against safe motherhood and polio issues, discriminatory practices against women and children through collaboration with with Media, use of ICTs and partnering with  traditional , religious and medical institutions

Previous articleWOFAN Establishes Schools for Children
Next articleWOFAN marks 2015 IWD by “MAKING IT HAPPEN” FOR BOYS AND GIRLS !