The media and a number of NGOS and the general public were invited to participate in the joint rally and peaceful procession organized by WOFAN, Society for Family health (SFH)- Kano,

and COPOP-PLWHA on the 3/4/2003 round major streets of Kano to draw the attention of the general public to the need to end the stigma and discrimination of people living with and affected by HIV/Aids.

The colorful procession with fleet of buses, motorcyclists in a beautiful lemon green jacket and placards with messages against stigma and discrimination started with the first stop over at the Palace of the District Head of Kumbotso and Dan Lawan Kano, Alhaji Ahmed Ado Bayero in Kumbotso Local Government area of Kano state.

At the palace, Alh. Ahmad Ado Bayero praised the efforts of the participating NGOS and copop members members for their courage in taking giant steps in informing and breaking the silence and myths surrounding HIV/AIDS. He shunned the discrimination of people affected and infected by the deadly virus. According to him, all his ward heads and community leaders will put heads together to ensure that at all public gatherings and community meetings, reminders will be sent to the general populace on the need to show love, care and support to all affected. Alhaji Bayero went on to say, “If campaign against HIV and stigma is to succeed, it must target all sectors of society, including religious leaders, the media, teachers and families”. The district head called on WOFAN to intensify training and awareness in his ward by conducting awareness and technical trainings for all his ward heads, traditional and religious leaders and the general populace particularly in his district council.

HIV Advocacy- led visit of 50 PLWHA especially women to the Emir of Kano on issues of stigma and discriminatory practices on people affected and infected with HIV.

The event witnessed the emir of Kano to hug a six months old HIV positive baby and called for other African leaders to shun stigma and discrimination of HIV persons.

The secretary of COPOP, Mallam R (name withheld) thanked the district head for his exemplenary actions and kind words, “if people living positively receive attention like this, and government provides adequate facilities, stigma will stop and more people will be willing to test and declare their status and surely, it will reduce the spread of the virus”.

A 7 year old girl living positively and who is already orphaned and now living with her grandmother was presented to Alhaji Bayero, who gave her a hug to prove to the general public that people living positively could be hugged and shown affection. The grand mother of the child thanked all the team and the traditional ruler for the support and called on government and NGOS to strongly support orphan children as a result of the HIV/AIDS.

The next stop over was to 2 media houses in Kano : the procession visited both the Kano State Radio and City Television (CTV). At Radio Kano , the Director of Engineering Service, Alh. Aliyu Adamu, who received the team on behalf of the Managing Director, Alh. Bello Kankarofi. With placards all raised up, an appeal was made by the coordinator of WOFAN, Hajia Salamatu Garba, for media to intensify information through the radio using jingles, drama, songs, debates and short talks by all stakeholders. The media was also called upon to waive charges on HIV programmes to enable more programmes to be aired for the benefit of the public.

On her part, the programme officer from society for Family health- SFH, Hajia Nabila Ismail, called on the MD to discourage programmes that can influence stigma and discrimination on positive persons. She further briefed the MD and all the staff of radio Kano of the activities her organization carried out during the world aids day celebration, which included a joint rally by SFH and COPOP in Dawakin Kudu LGA where the chairman shook hands with the COPOP chairman as a sign to fighting stigma. Other activities at the SFH-COPOP joint programme included songs and drama against HIV/AIDS stigmatization. She further said, “SFH is a leading Reproductive NGO in Nigeria and a major partner in a 7-year programme on Promoting sexual and reproductive health and HIV/Aids reduction (PSRHH), in Nigeria . In his response the MD praised the efforts of the collaborating NGOs and encouraged others to learn from their experience and determination to fight HIV/AIDS in Nigeria . He assured the rally team of constant support from the media,

At the CTV- Kano, the Permanent Secretary, Alh. Faruk Umar Usman listened attentively to the similar address as his radio counterpart and addressed the team by throwing more light on ways on reducing and preventing the spread of HIV/AIDS. He also spoke at length to give encouragement to the COPOP members and to inform them of the plans of the federal to discourage all forms of stigmatizations through sensitization and awareness campaigns. The voices of positive women were also captured when in a low soft voice; one of the women living positively thanked the management of CTV for the strong encouragement. “Most of us are married women and got infected through our spouses, it is therefore wrong to link HIV/AIDS to prostitution only”, she says. In his vote of thanks, the secretary of COPOP thanked the MD for his support on the fight against HIV/Aids. The secretary stated that it is sad that the general public needs to be reminded that there are other ways of spreading HIV/Aids outside sexual intercourse and that the media should work hard towards obtaining behavioral and attitudinal changes through out Nigeria in order to achieve a sustainable reduction and prevention of HIV/Aids.

Dr. Bashir Abba, Coordinator of the State AIDS Control Programme in the Ministry of health received the procession on behalf of the State Commissioner of Health, Dr. Sanda Muhammad. The Commissioner said the state government has established a voluntary counseling test center (VCT) at the Infectious Disease Hospital (IDH) to be commissioned soon. In his vote of thanks, a member of COPOP, Malam Jae (not real name) called on the general public to stop stigmatizing and discrimination against them. He lamented that most hospitals and health posts lack the desired drugs and facilities for the treatment of HIV/Aids symptoms, this according to him could be one factor why a lot of people have declined from testing to know their status. He therefore solicited for strong advocacy on voluntary testing by all and the federal government and all the traditional leaders should make sure there is an enabling environment for positive people to live a life free of stigma and discrimination. 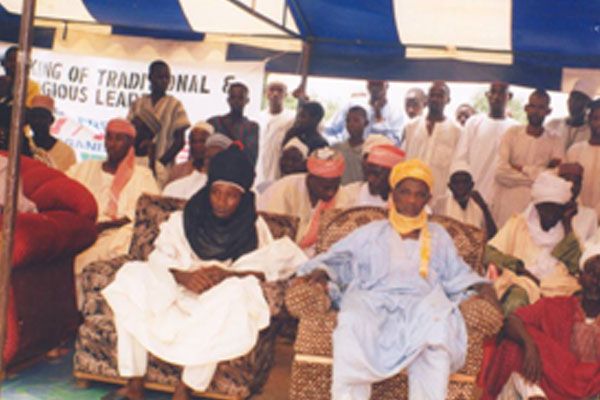